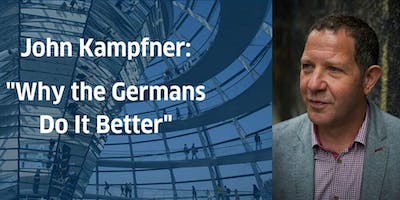 West Africa Money now list this event called Brady Lecture 2019 with John Kampfner which is taking place on Wed, 12/04/2019 - 19:00 .  Our mission is Money, Business And Investments to help you in becoming successful.

We are delighted to have author and broadcaster John Kampfner as this year’s speaker for the Brady Lecture. In his talk, Kampfner will focus on his forthcoming book provocatively titled Why the Germans Do It Better. Lessons from a Grown Up Country (to be published in July 2020).

When the Berlin Wall came down in 1989, John Kampfner was working as the East Berlin correspondent of the Telegraph. Thirty years later, he finds a country transformed. Germany, for sure, faces problems: the social effects of the refugee influx, the rise of the AfD, a slowing economy, an ageing population, worsening infrastructure and a continued timidity in foreign affairs. Yet Kampfner juxtaposes contemporary Germany with the mayhem of Brexit Britain and Trump's America and argues that its political maturity enables it to confront the challenges of the contemporary world better than others.

The lecture will be followed by a Q&A. We welcome all ticket holders to join us for a reception afterwards.

John Kampfner is an award winning author, broadcaster, commentator and force in the UK creative sector. He was Chief Political Correspondent at the Financial Times, political commentator for the BBC's Today programme, and editor of the New Statesman, regularly contributing to British and international media. He established the Creative Industries Federation in 2014 and was its CEO for five years. He was the founder Chair of Turner Contemporary, one of the UK's most successful art galleries. His previous five books include the best-selling Blair’s Wars (2003) and Freedom For Sale (2009), which was short-listed for the Orwell Prize. He is a Senior Associate Fellow at the Royal United Services Institute (RUSI) and adviser to the Frankfurt Book Fair. He presents the podcast series Pale, Male and Stale with the comedian Shazia Mirza which looks at politics and identity.

Held every year, the Goethe-Institut London’s Brady Lecture commemorates the achievements of broadcaster and lecturer Philip Brady (1932-1997). He contributed remarkably to cultural exchange between Great Britain and Germany, broadcasting regularly on the BBC and maintaining a close relationship with the Goethe-Institut throughout his career.

Here you can find  Videos of previous Brady lectures

Your Venue Location On Google Map

Your Google zip or post code look up is